It is no secret that Taiwan’s President Ma Ying-jeou anxiously seeks to attend the APEC summit in Beijing in October and facilitate a historic meeting with Chinese President Xi Jinping, hoping to extricate himself from deep political woes at home and salvage his presidency. 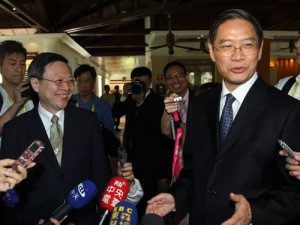 For this reason, Taiwan’s Mainland Affairs Council Minister Wang Yu-chi made a special trip to Nanjing to meet with China’s Taiwan Affairs Office Director Zhang Zhijun from Feb 11-15. They met briefly last October at the previous APEC meeting, but this time was to be their first substantive talk on the development of cross-strait relations between the officials in charge of Taiwan-China affairs.

The international media devoted considerable attention to the event closely watching whether the Nanjing dialogue would become a preliminary meeting to prepare for a future Ma-Xi summit.

Although cross-strait ties have improved dramatically, the two sides are still far apart on sovereignty and other key political issues, hence Director Zhang told Minister Wang that time is not yet right for Xi to meet Ma at the APEC.

However, Beijing’s response leave room for an about-face if certain demands are met and hinted that the “right” conditions must exist before Ma’s trip. Knowing fully well Ma’s helplessness, Xi could seize the opportunity to extract huge political concessions from Ma the supplicant. What Xi wants most is Ma’s firm pledge to begin cross-strait political dialogue soon.

The dialogue on cross-strait political ties — concerning Taiwan’s future political status and international participation, confidence-building measures and a peace agreement — would be extremely complicated and time-consuming. People in Taiwan, and the U.S. as well, are unlikely to allow Ma to deliver Taiwan to China.

On the other hand, Xi seeks to set the train in motion while Ma is in office and create an irreversible, irrevocable framework to lock Taiwan into the “one China” cage that could not be undone even if the DPP were to return to power in 2016.

Beijing is exerting immense pressure on the Ma regime toward more cross-strait political dialogue that will lead to a peace agreement. Ma so far has put forth a formula of “economics first, politics later” to restrict cross-strait interaction to economic relations. Displaying Beijing’s impatience with Ma’s stonewalling against cross-strait political dialogue, Xi reportedly told Ma’s special envoy to the APEC summit last October: “The issue must step by step reach a final resolution and it cannot be passed on from generation to generation.”

From Beijing’s perspective, this agreement is intended also to perform vital political and united front functions in Taiwan. As shown by the experience of Hong Kong, the agreement will provide legal cover for China’s agents to live and work throughout Taiwan. Through Chinese enterprises and shops, China’s operatives would continue to build up its resources, and strengthen its capability to influence and shape Taiwan’s political process and policy efforts toward peaceful unification without firing a shot.

With the seven-in-one elections to be held in November this year and the presidential and legislative elections in 2016, many KMT leaders — and Beijing — are apprehensive that voters could reject KMT candidates in November and vote the KMT government out of office in 2016. Beijing has much at stake and is looking for ways to cope with a weakened Ma administration.

Most significantly, Beijing is attempting to hand-pick a candidate to run for the mayor’s office in Taipei.

Sean Lien has formidable credentials: He seems quite popular in Taipei and enjoys the support of the pro-China media, leading the polls even before officially having announced his candidacy. Lien comes from a wealthy and well-connected family and is the son of former vice president and former KMT chairman Lien Chan, who, as Beijing’s principal interlocutor in Taiwan, enjoys Beijing’s confidence and has met several times with Xi.

Moreover, Xi has also met Sean Lien and appears to be fond of him, joking about his height during a meeting at the Great Hall of the People in Beijing. As mayor of Taiwan’s capital, Lien would provide Beijing not just a direct link to the KMT leadership, but also a strategic power base to counterbalance Ma and post-Ma leaders, and to affect Taiwan’s cross-strait policy as well. Thus this is a race for more than the mayoralty of Taipei.

To facilitate Lien’s electoral victory, Beijing tries also to manipulate the selection of the mayoral candidate of the Democratic Progressive Party (DPP) and the broader opposition camp. Beijing and pro-China media appear to have endorsed Ko Wen-je, a well-known physician and an independent candidate who leads most opinion polls, but has been accused of soliciting Beijing’s support during trips to China and of being Beijing’s “Manchurian candidate”.

At the same time, Beijing has cultivated links with the higher echelons of the DPP. Former premier and DPP chairman Frank Hsieh was the most prominent DPP figure to visit China last year and Beijing has reportedly also sought a visit from former DPP chairperson and 2012 presidential candidate Tsai Ing-wen. To exert greater influence over the DPP, Beijing also seeks to influence the election of its party chairman in May.

Former Chinese president Hu Jintao is said to have confided to his inner circles that it is both easier and less expensive to “buy” than to militarily conquer Taiwan. Hence Beijing has been steadily acting on this logic through economic means and a wily united front operation to make inroads into corporate Taiwan, the ruling and opposition parties’ media, and at the grassroots level to enhance Beijing’s outreach and control over the nation in order to bring about unification.

Beijing has eschewed the threat of force and placed greater emphasis on other means of influence to avoid possible military confrontation with the U.S., which has maintained a protective security relationship with Taiwan as mandated by its Taiwan Relations Act.

Indeed, Beijing’s approach toward Taiwan has changed so much and so quickly that it seems to be catching observers in both Taiwan and abroad dangerously off-guard.

Parris Chang is a professor emeritus of political science at Penn State University and chief executive of the Taiwan Institute for Political, Economic and Strategic Studies.